Racing 2021 - Between us all at Saxtead we have part or full ownership in 10 horses to run this season! 4yo Ten Thousand Stars goes soon to Alex Hales, 3yo Triple Jaye (with Ontoawinner) will debut soon for Tim Easterby, 2yos Fantastical (raced with Gordon Bulloch) will go to Charlie Wallis, Cheese the One is with Joe Parr in Newmarket, as is Kelapa who has been part leased for this season and next, Dabirsim x Akhmatova and Ardad x Sandy Times are in the offthebridle II syndicate with Charlie Fellowes and George Scott, and we have also joined Kingsley Park 26 with Mark Johnston with colts by Bated Breath and Highland Reel and a filly by Bobbys Kitten. With plenty of SLL graduates to follow too the tracker is going to be busy!

Covering 2021 - Mating plans for this year are Madame Mere to Postponed, Futureland to Jack Hobbs, Fisherman's Tale to Postponed, Lady Tabitha to Muhaarar, Akhmatova to Ulysses, Arabian Music to Twilight Son, and Keriyka to Muhaarar. At the time of writing, the last day of March, the first 5 of these are scanning in foal.

11 March - Smokey (Outstrip x Lady Tabitha) wins her 6th race in 6 months, her first class 4 victory. She is now rated 75 and we hope she will continue to progress. She is now the most winning by number of wins progeny of Outstrip and also the most winning Saxtead bred horse.

Foaling 2021 - A very condensed affair this year, with 3 of our 4 foals arriving on the same day, 3rd February, and the final arrival on 21st February. Colts by Equiano, Mukhadram and Postponed, and a classy filly out of Akhmatova by Postponed.

5 February - Seeking Perfection (Twilight Son x Arabian Music) breaks her maiden at the second time of asking. Following up her debut 2nd she wins a class 5 novice race at Newcastle in good style.

Yearling Sales 2020 - We had six yearlings this year. We decided early on that we would retain the Aclaim filly out of Keriyka as she is a 3/4 sister to 115 ated Listed winner Rocky Ground. Keriyka is not getting any younger, and she slipped her foal last autumn, so it is time to keep a replacement from her, and the yearling has been names Kelapa (coconut in Balinese). Our Bobby's Kitten colt was not selected for a sale that we were happy with, so he was sold privately to Against All Odds Racing who also own Green Etoile, bred at Saxtead. Our Ulysses filly and our Outstrip filly were so pleasing on the lunge that we have retained 50% in each of them. The Outstrip goes to Joseph Parr who has bought 50% of her, and the Ulysses filly goes to Adrian Nicholls and will be half owned by Gordon Bulloch who previously owned Alotabottle, and will run in his colours. Our Dabirsim colt sold for 20,000gns to George Scott and will run for the Off the Bridle Syndicate, and our Twilight Son colt suffered most from the Covid downturn and made just 10,000gns at the Doncaster premier sale which was disappointing, but he sold to top trainer Karl Burke so we look forward to seeing him on the track in 2021.

April 2020 "Covid 19" update. Covering has finished early as we feel its the right call for us as we are able to be well isolated here in rural Suffolk, and safety comes first. We have two 3yo homebred fillies staying in training, we feel its important to support our trainers, and Smokey and Ten Thousand Stars will both be ready to race as soon as it is possible. We also have a 25% share in Lady Tabitha's Charming Thought filly with Tim Easterby, who is progressing nicely. Obviously we are as anxious as anyone to see racing resume, it is so important for the industry going forward.

Covering 2020 - Four mares have held first cover in 2020: Keriyka to Equiano, Lady Tabitha to Mukhadram, Akhmatove to Postponed (all due January 2021) and Arabian Music also to Postponed. Futureland was sadly barren to Sir Percy, and will now be rested as will Madame Mere. We feel it is the right thing to do to hold back from covering these last two mares given the covid-19 situation. 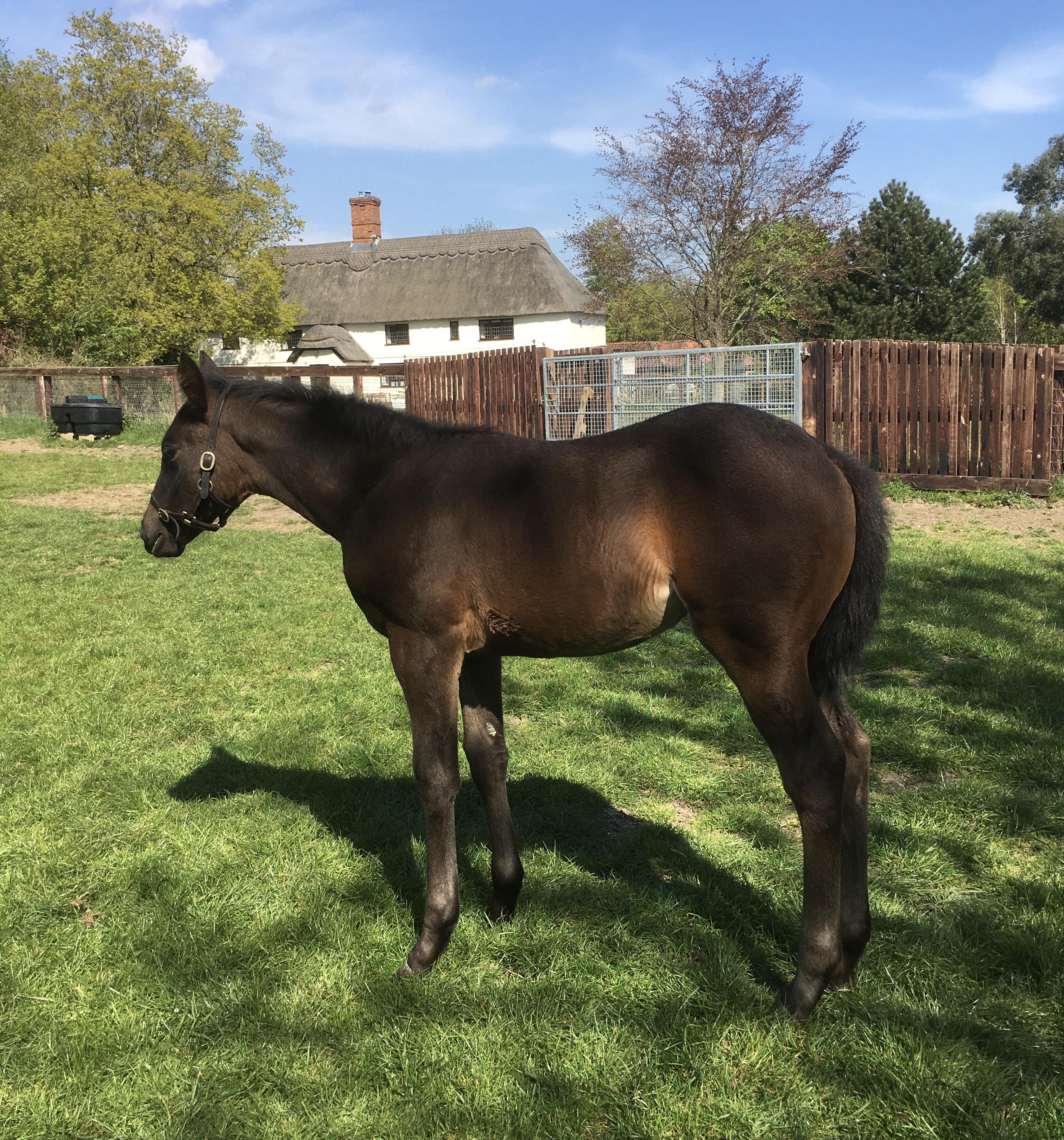 Foaling 2020 - We had just four foals born in 2020. Colts by Tasleet, Mukhadram and Farhh, and a cracking filly out of Arabian Music by Poets Word.

Racing news. Smokey made her debut at Wolves on 9th March and finished 8th. She blew more than was expected so should inprove for the run as she gets fitter. She wasn't beaten far in total, and she shows plenty at home, so we hope for improvement in due course.

Trainer news February 2020 - Its always nice to receive positive news from trainers about youngsters we have sold. Karl Burke reports that the Twilight Son filly ex Arabian Music is one of his nicer 2 year olds this year, and she should be an early summer runner, covid allowing. And from Ireland the news is also good with regards to the Sea the Moon colt ex Madame Mere who is reported to be going well.

December 2019 - Sales news - We had just one foal forward for the December foal sales, the last foal from Sakhya, and he sold for 6,000gns.

August 2019 - Sales news - four yearlings were entered for the Doncaster yearling sales and all found new homes, top being our Twilight son filly who sold for 11,000gns to Karl Burke. 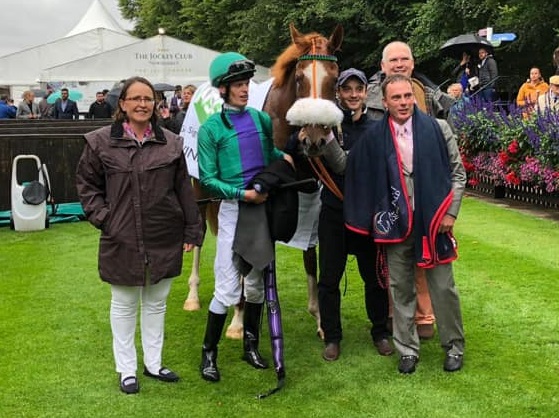 16 August 2019 - WINNER - Our homebred filly Ten Thousand Stars (Toronado x Myriades D'Etoiles) wins her 2yo novice at Newmarket - our first winner at HQ and a first also for her trainer Adrian Nicholls.

1 August 2019 - WINNER - Alotabottle (Mukhadram x Lady Tabitha) gets off the mark in a handicap at Epsom for new trainer Kevin Ryan.

July 2019 - TANFIDH - an exciting new mare joins us from the July Sales.

2nd May 2019 - WINNER - Green Etoile (Nathaniel x Myriades D'Etoiles) wins his handicap and seasonal debut at Salisbury. Came from way off the pace, the penny dropped and he got up to win in a photo. Hopefully more improvement still to come.

28 April 2019 - Foaling is finished! We have 9 foals, colts by Dabirsim, Bobby's Kitten, Twilight Son and Spill The Beans - and fillies by Aclaim, Time Test, Outstrip, Lethal Force and Ulysses. Seven mares have been covered to date, to Tasleet x 2, Poet Word, Lightning Spear, Outstrip, Equiano, and Farhh. Fingers crossed now for the scans.

February 2019 - The first foals of the year have arrived - Fillies for Arabian Music (by Outstrip)and Futureland (by Ulysses). Both smashing individuals.

February 2019 - WINNER - Lady Parsley bred at Saxtead out of Lady Tabitha breaks her maiden at Chantilly in France.

January 2019 - As last year's yearlings turn two the entries begin to go in for the early closing races. Of the five yearlings from Saxtead's 2017 crop, four are entered in their respective sales races. Holding entries for the Tatts Book 3 race at Newmarket in October 2019 are Smokey (Outstrip x Lady Tabitha), Ten Thousand Stars (Toronado x Myriades D'Etoiles) and as yet unnamed colt by Ravens Pass ex Futureland. Entered in the Goffs UK sales race at York in August is Zakher Alain (Sepoy x Madame Mere).

December 2018 - Exciting times - three new mares have arrived at Saxtead bringing the broodmare band to a total of 10. Totally Millie is by Pivotal and is in foal to Time Test; Akhmatova is by Cape Cross and is in foal to Dabirsim; and Keriyka is by Indian Ridge and is in foal to Aclaim, carrying a 3/4 sibling to her first foal, Listed winner Rocky Ground.

November 2018 - Thaayer wins first time out for new trainer Rebecca Menzies. On his third start he wins a noveice race at Newcastle. On the same dam Mr Pumblechook runs a lovely 2nd in a class 3 novice hurdle at Newbury.

October 2018 - Saxtead horses on the move - the 3 colts offered at the yearling sales were all sold: colt by Sepoy to Adrian Nicholls; colt by Olympic Glory to Joe Foley and colt by Raven's Pass to Stuart Williams. The two fillies were bought in and are now in training in Newmarket with Amy Murphy. Thaayer, bred here and sold to Shadwell for 60k as a yearling, was sold at the HIT sales to Rebecca Menzies. He was placed on both his starts for Shadwell. Roundhead has been sold privately by Grant Tuer, for whom he won 2, to Richard Phillips to go hurdling.

August 2018 - Saxtead horses and their relations have been running very well this month. Saxtead bred Roundhead (3yo by Helmet) has won twice for his new trainer Grant Tuer. Lady Tabitha's Mukhadram 2 year old Alotabottle made his debut in a class 4 maiden, finishing 4th over 5f, will probably need further in time. Futureland's half brother Cubomania was an impressive winner of his first chase at Perth for Gordon Elliot. And Justanotherbottle, whose dam is half sister to Lady Tabitha just lost the Stewards Cup at Glorious Goodwood in a photo finish, pipped at the post.

Sales 2018 update - We have five yearlings heading to the sales this year, and following the inspections they have all been accepted to UK sales. Two colts head to the Doncaster Silver Sale - Sepoy ex Madame Mere and Olympic Glory ex Arabian Music. Three yearlings head to Tattersalls Book 3 - fillies by Outstrip ex Lady Tabitha and Toronado ex Myriades D'Etoiles, and a gorgeous colt by Ravens Pass ex Futureland, pictured above in May.

Autumn 2017 - Under the first dam of Sakhya a few steps to the right is the blue blooded broodmare Inca Princess. The partnership owning her has been dispersed at the various autumn sales, her second progeny Elizabeth Browning breaking the October HIT record price at 700,000gns. Her first foal Johannes Vermeer was a gallant second in the Melbourne Cup. The third, a yearling filly by Galileo made 200k in Book 1, the foal full sister made 1.1m Euros at Goffs. Inca Princess herself sold for 1.9m Euros. Quite some acheivement.

20.9.17 - Yearling colt ex Blue Mistral by Mukhadram sells at Fairyhouse for 24,000 Euros to Karl Burke. Bred by Saxtead Livestock, he was sold as a foal for 20,000gns at Tattersalls .

Dropped off our lovely Garswood yearling filly ex Sakhya to begin her racehorse life with Amy Murphy in Newmarket. A half sister to 5 winners, 75% available on free lease.

10.3.17 - Super win for Afandem, half brother to Myriades D'Etoiles, who runs away with the Class 1 conditions race at Chantilly, making him unbeaten, 2 wins from 2 starts.

14.2.17 - A gorgeous filly by Outstrip for Lady Tabitha born at 6am this morning

13.2.17 - great excitement on the stud at the arrival of the first foal for 2017, a handsome bay colt who is a first foal for winning Kheleyf mare Arabian Music

26.11.16 - A new top price for Saxtead Livestock when our 2016 colt foal by Mukhadram ex Blue Mistral sold for 20,000gns. Blue Mistral cost 4,500gns in foal to Motivator and the Mukhadram cover fee was 7,000gns. Many thanks to consigner The National Stud.

14.10.16 - Our Mount Nelson colt ex Myriades D'Etoiles sold at Tatts to Mark Tompkins Racing in Newmarket. Looking forward to watching his progress, great news that he will be trained in HQ. That's all our 2015 crop with trainers, one in France, two in Lambourn, one in Newmarket and one goes to Richard Hannon's.

2.8.16 - WINNER Southern Belle, half sister to our Arabian Music, wins a class 4 handicap of 83 rating at Nottingham. Her first step up to 6f, seemed to suit well.

31.7.16 - GROUP ONE WINNER Elliptique, half brother to the dam of our Myriades D'Etoiles, wins a Group 1 race in Germany. His first run at the highest level.

27.6.16 - WINNER Love Dreams (half brother to Lady Tabitha by Dream Ahead) wins his second start, the class 2 Spindrifter Conditions Race at Pontefract, by 5 lengths. This is his second win from 2 starts, and he looks like a promising youngster for Mark Johnston.